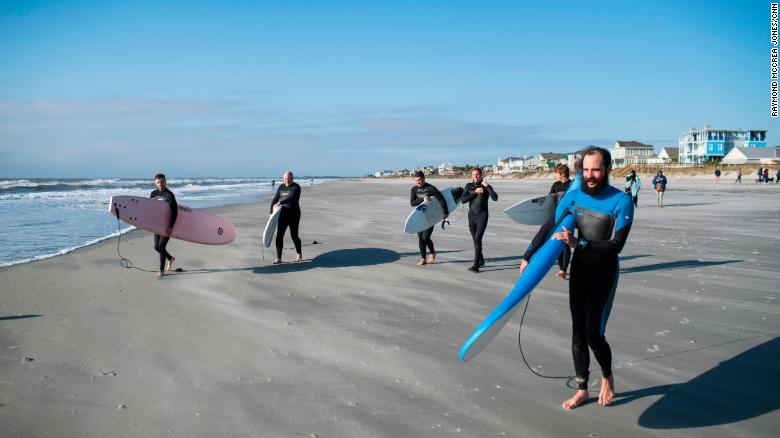 He saw intense firefights during his two tours, and many of his comrades lost their lives.

“I just knew I was going to die,” Manzi said.

While on patrol, Manzi and fellow soldiers would talk about life after war.

“I remember looking at one of my (medics) and being like, ‘I’m going to go surf one day,'” said Manzi, now 32. “There was just something that looked just so incredible in how these guys lived their lives.”

But after returning home in 2005, he struggled for years.

“I felt like I had no control over myself, and I was afraid of myself,” said Manzi, who was suffering from a traumatic brain injury and post-traumatic stress disorder.

He sought professional help to cope day to day. But it was the moment he took a surfboard he bought at a yard sale and hit the waves for the first time
when his soul began to heal.

“I had my ass handed to me that day, but it was the first time I felt alive again,” he said. “I could go out there and just turn off the world.”

Manzi quickly fell in love with surfing. In 2013, he moved to Folly Beach, South Carolina, where he started giving surf lessons. On the beach, he met and bonded with other veterans, and he soon realized he had found a way to bring healing to their lives.

Today, his nonprofit, Warrior Surf, provides free surf camps for veterans and their families. Each camp lasts six weeks and offers therapy sessions on the beach.

The group has found that having therapy on the beach makes it more approachable for veterans. They aren’t required to participate if they’re not ready, but they are encouraged to work with the organization’s therapist.

In the last two years, around 300 people have benefited from the program.

“You feel safe out there when you know you got a bunch of brothers floating around you,” Manzi said. “We’re just taking a natural approach to healing.”
CNN’s Meghan Dunn spoke with Manzi about his work. Below is an edited version of their conversation.

CNN: What’s it like for you when you’re out on the ocean?

Andrew Manzi: There’s only one thing I’m focused on when I’m out there: surfing. It’s as powerful as meditation, breathing techniques, yoga. You really get in tune with your body.

CNN: It’s not just veterans out there in the water. Why do you involve their families?

Manzi: When we started, it was very veteran-based. We definitely were focusing on the veterans. But really quickly it became apparent that the whole family needs this stuff. We try to create an opportunity where the family can come back together again.

How do you expect an individual to get better in his whole entirety if he goes home and he’s like, “I’m doing the surfing thing, these guys are great, I’m feeling good, I can conquer the world” — but the family’s been in the trenches taking grenades for the past four years since he’s been back from deployment? That’s why we all agreed that we need to really incorporate the whole family. 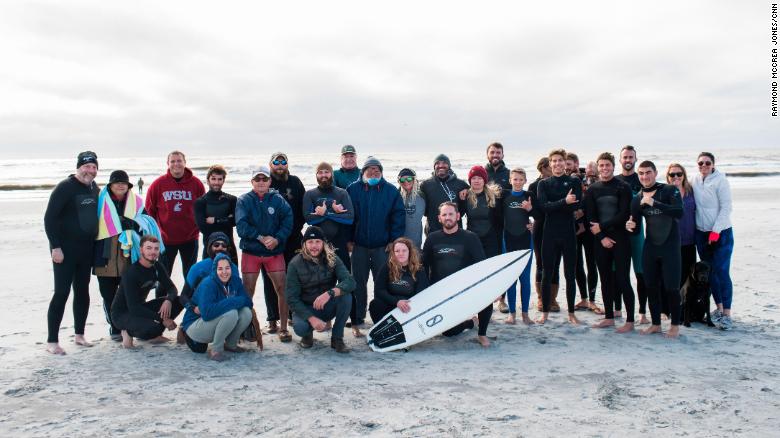 Manzi: We take the veterans outside the clinical setting of a room in an office building or a hospital — doors shut, white walls, fluorescent lights, it’s just uncomfortable. We conduct all our therapy on the beach or on the river. You wouldn’t know the difference between a veteran and (therapist) sitting on the beach and those two people sitting right over there.

After therapy, you have to either go surf with another veteran or at least get in the water and paddle around and kind of decompress. You raise those symptoms pretty high. Let’s say you’re talking about a certain day, you’re going to get a little bit of anxiety. I think the best way to battle that is to go calm down in the ocean and relax and let the ocean kind of cleanse you, bring you back so you’re good, you’re fine — instead of just hopping in the car and driving back home and sitting in the closet again.

CNN: What do you want veterans to take away from this?

Manzi: I want them to take away a little bit of hope, because hope leads to courageous actions. There’s so many things out there that you can try and do, and that time in your life shouldn’t dictate the rest of your life. There’s a lot of brothers and sisters out here that will welcome you. Life can be really good if you make it good. And this is a way we can start.

Want to get involved? Check out the Warrior Surf website and see how to help.